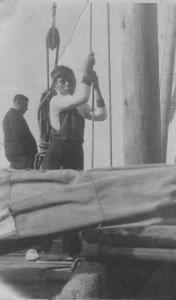 The history of dredging and maritime works of the Boscolo Cucco family from Chioggia begins around 1870 with a 25-meter barge for the transportation of mixed goods, from agricultural products to sand, bricks and rubble, in that unique environment that is the Venetian Lagoon where the trades of land and water have been coexisting from the beginning of time.

In an era in which barter and exchange were still an economic system, one that will survive as an archaic wreck until the 1940s, even the transporters were often paid in kind, with services and products of their own customers.

Around 1900, Eugenio Cucco receives bequeathed by his father the barge which starts “sabbionate” i.e. transporting loads of sand, gravel and other inert material employed in the construction and building of infrastructure, although without abandoning mixed transport. During the Great war of 1915-1918, the watercraft was armed with a machine gun and transformed into a battleship stationing at the mouth of the Piave.

This are the years of the sailing Navy which, according to a strong and deep-rooted tradition typical of the Adriatic, was also the emblem of the boat badge and the family, through the colors and symbols painted on it. The Cucco family thus had its own sail-boat, red background and black sail-tip and clew cringle, with the symbol at the center formed by a tree with two birds on its branches.

Gino Cucco, Eugenio’s son, continued his father’s work with the same barge, later adding a “Topo” (a typical Venetian boat) to the fleet.

The times were changing quickly and the advent of the engine ultimately led to the abandonment of sailing in the years around 1950. This was a time when the national economy was destroyed by the war, a time when those who had roots in a craft succeeded in mastering the world of work and trade, and Gino Cucco had them in abundance.

The working techniques change, the equipment follows the automation process, the boats get bigger, and so the “sabbionante” Gino Cucco becomes an entrepreneur, with the knowledge of overcoming the old and plunging into a complex and tortuous future.

The excavation of sand and mud was an essential activity in the lagoon environment. In fact, during these years of change Gino Cucco consolidated his professionalism locally, progressively innovating the technology of the fleet, and soon made a name for himself in the field of maritime and river works along the Adriatic and national coastlines. This also contributes to establishing the company’s leadership in the industry. He lost his life in a terrible accident in 1985. 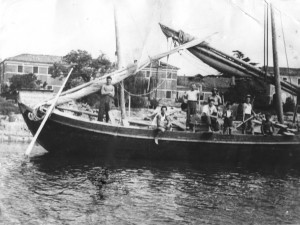